Carpetbombing, according to the Merriam-Webster dictionary is: 1)to drop large numbers of bombs so as to cause uniform devastation over a given area. 2) to bombard repeatedly, widely, or excessively.

Although I’ve fortunately never been a victim of carpetbombing in the combat sense, I find myself carpetbombed on a daily basis on the internet, particularly in Facebook. And I am sick of it.

Lets make a few assumptions about Facebook. For starters, it would be nice to assume that the people who you are friends with on Facebook know you. Maybe they don’t know you really well, but at least they’ve got the basics nailed. On my friends’ list, even if I have never met a particular person in person, it’s a safe bet I know where they live, whether they are married/single, gay/straight, etc. I call that part of the effort required as one human getting to know another human.

So why is it that people who know you on Facebook, know your likes, where you live, etc. insist upon and persist in sending you invites to every single event that happens on the planet even if their event is something would would never be remotely interested in?

I love my friends back in New York, really I do. But I don’t love being invited to every concert and Tupperware party, because, well, I am “geographically challenged” (aka, I live in Sacramento these days).

But I know that, for the most part, those are honest mistakes made by regular people just spreading the word about their interests. I get REALLY pissed when I see so-called, self-professed marketing “experts” engaging in this mindless, thoughtless carpetbombing, using Facebook invites.

I was recently “invited” (and by invited, I mean, I happen to be one of this person’s thousands of Facebook friends) to the “Sacramento Baby and Toddler Expo”.

Yes, I was invited to a “Baby & Toddler Expo”. Those who don’t know me may shrug their shoulders and say, “So what?” Those who know me are still laughing, while simultaneously cleaning coffee spray off of their computer screens (and will tease me about this into the next millennium). Anyone who has taken a brief second to know me, knows that kids fall squarely into my “not my thing” category. 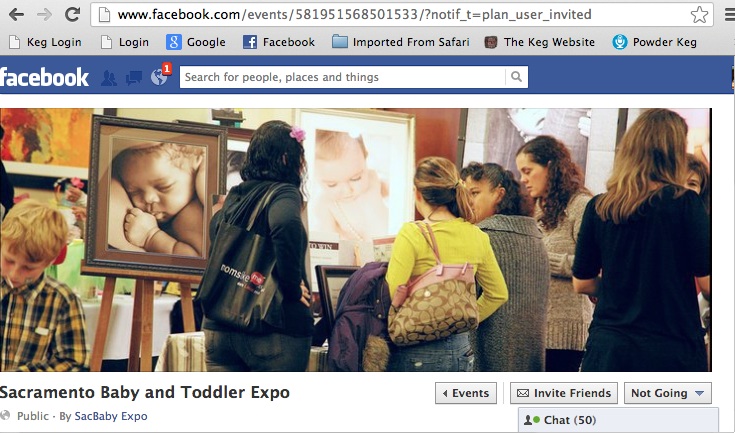 If this person had taken a few minutes to actually put some thought into the guest list for this expo, they would have looked at my name, along with other people’s names, and said, “not our target audience”.

Instead I got carpetbombed again.

I won’t even mention (ok, ok, I will) that the “person” who posted this event on Facebook is actually a business using a personal Facebook profile, which is an obvious violation of Facebook’s terms of service.

So really a good question to ask, is, when promoting your events and businesses on Facebook: Are you being thoughtful? Is it a good idea to invite your Christian friends to the atheist rally at the Capitol? Is it wise to invite atheists to a Christian business networking group? Probably not.

Take the time. Be thoughtful in your marketing. Stop carpetbombing.