I’d been wanting to have Tamara Dorris on our show for the longest time. Problem is Tamara hosts her own podcast, Sacramento Smiles also on Blog Talk Radio on Thursdays at 10 am.

For those of you not in the know, Tamara Dorris is pretty well known around these parts. She’s been in real estate and real estate education for over 25 years, so she is no real estate fly-by-night carpetbagger circa 2005. But that’s not why people know Tamara. We know her because she brings 100% of herself to what she does. So if you’re at a “networking” event, you’re going to meet the real Tamara, not a plastic, contrived version of a successful business person speaking in buzzwords.

Which, as you know, we LOVE here on the Keg.

Tamara was eager to talk about her true passion: writing. I thought I knew “Tambo” pretty well (over our shared love for wine), but I had no idea she was a fiction writer, she now has a blog about it. She talked about blending her passion with her long-time career and we riffed on how, no matter what, you have to work your ass off to make stuff go, there’s no substitute for that. However, it is when you are able to bring passion to your hard work that the magic really happens.

And then we went down the rabbit hole of the the ripple effect of bringing passion to your work. If you’re not careful, you may find yourself randomly crying at concerts and telling your business partners you actually like flowers (oops did I say that out loud).

Jerry was at a speaking gig in San Diego this morning, but was able to join us via Skype. Our Riff Raft co-founder Michael Clark sat in as himself and Mrs. Jessica Clark dropped in to say hi. At one point we had five people on the air. We are definitely not used to a five-some on the Keg, but it worked! Jerry’s absence meant more breakfast champagne for the rest of us. And finally, no meeting between Tamara and Jackie would be complete without shoe talk: 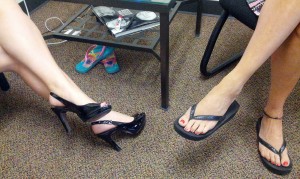