Hello. My name is Jackie and I hate positive thinking. There, I said it. Keep in mind, I am not “supposed to” hate positive thinking, let alone admit that I do. After all, I am a therapist and a mentor and my job is to tell you to “look at the bright side” and “see the silver lining”, right? Wrong. That is not how I work. Instead, this is how I work:

Use empathy, not platitudes.

Telling people to “look at the bright side” and “see the silver lining” is insulting to their intelligence. Everyone knows that many (but not all) things in life have a bright side, somewhere, no matter how well-hidden at the darkest moment. This information is completely unhelpful when pointed out in the dark of night.

In a dark moment, it is far more helpful to join someone in the gravity of the moment and, “this sucks.” Acknowledging the supreme shittiness of a bad situation goes a lot further than providing an empty positive-thought platitude.

Positive thinking is dangerous because it teaches us to ignore reality. When you are trying to solve a problem, ignoring the present reality is the worst thing you can do, because it completely ignores the the facts of the situation. A positive thinker could say to me, “you can be an WNBA star if you put your mind to it”. The facts of the situation: I am 5’2″, 40 years old. A WNBA career is not going to happen, even if I dreamed really hard. 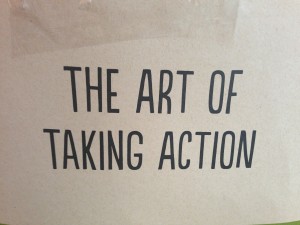 Instead, decide on the action steps you’ll need to take in order to become thin and strong and then actually take them. Sitting in your apartment writing “affirmations” and making dream boards will not get you any closer to your goal.

Affirmations are fiction. Stop doing them. You’re wasting your time. Simply telling yourself things that are not true will not increase the likelihood of them becoming true in the future. Telling yourself you’re a millionaire when you are not just confuses the shit out of your subconscious mind and keeps you stuck.

Acknowledging and accepting reality while focusing on what you can actually do to change what you don’t like will get you where you need to go. When you know your bank account is low, sit down and look at the numbers. This will hurt for a bit. But if you only have $26.00 in your checking account, you need to see that there is only $26.00 sitting there. Knowing what’s real seems more painful, but knowing the facts is imperative to changing this situation.

The same goes for relationships. If someone in your life is being a jerk, accept that, for whatever reason, they are a jerk right now (and possibly forever). Positive thinkers spend an inordinate amount of time searching for someone else’s positive attributes and conjuring about who someone else “could be”. Stop doing this.

It’s not our job to decide someone else’s “potential” because they may not see it, want it or decide to live out your version of their potential. It also ignores the possibility that you could be dead wrong about them. It wastes time and energy. So, stop it.

When you get caught up in looking only at the negative aspects of a situation, you are guilty of doing the same thing the positive thinkers do, you’re just on the other side of the pendulum. Sitting around lamenting the loss of “the way things used to be” and resigning yourself to what’s available without trying something different ignores reality and keeps you stuck.

There are a lot of people out there trained in occupations that are fast becoming obsolete who are ignoring reality. Instead of trying new tactics and obtaining new skills, they are complaining about the lack of available jobs or the “intrusion” of disruptive technology. These are the people who are being left behind in droves because they aren’t taking action, they’re just fighting against what’s happening.

Warning: sports analogy ahead. In football, the best quarterbacks don’t just practice and rotely play football, they are constantly assessing and reacting to the actual variables on the field. A great quarterback does not show up and say “I’m playing Peyton Manning today, there’s no way I can beat him so I’m not going to try”. He also doesn’t say, “I’m playing Mark Sanchez today, I got this, I’m just going to phone it in.” (apologies to NY Jets fans for that second one).

The best quarterbacks are aware of the moment and work with what is actually happening on the field that day. If the other team’s defense is weak, they use that information. In short, they acknowledge reality, work in the moment, to try and win that day’s game. They don’t lament that last year’s team was easier to play and they also don’t visualize that playing next year’s team will be easier. They prepare, they show up and they think on their feet.

A quarterback wouldn’t be great if all they did was sit on the sidelines drawing plays on paper, or if they played a game based on pre-conceived notions of the opponent instead of actual present variables.

The same goes for the rest of us. What do you need to do to adjust your thinking?